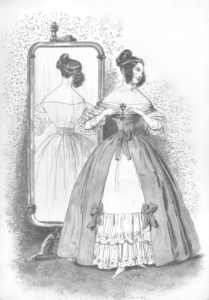 When one is writing a family saga that takes place over 90 years, from 1837 until sometime in the 1920s, and one has been, in a previous life a costumer, one finds oneself interested in what people are wearing. Rather than dressing every one in pseudo-Victorian, I went out to do some research regarding fashion for men, women, and children, and take a look a fashion silhouettes of the various times I would be writing in. The Klaereon Scroll series starts in 1837, with two well-dressed gentlewomen, Octavia and Lucy Klaereon.

1837 is an interesting time in fashion. The Neo-Classicism of the Regency with its minimalist structure has given way, twenty years later, to a less basic shape as women embrace the ideals of a tiny waist and a larger skirt. In the evolution of the silhouette, we can see our way toward the giant hoops of the 1850s, as the skirt ever widens, and toward the constricting corsets of the 1860s-1880s, as the waist narrows. The resulting hourglass figure would continue to become more exaggerated until the first bustle brought in some variety around 1870. The foundation upon which this silhouette was built consisted of a chemise, covered by a corset, which cupped the breasts. Petticoats padded the skirt and held the corset in place.

Of particular interest at this time in fashion is the evolution of the sleeve. The sleeve of the early 1830’s was full at the top, but as the decade progressed, the fullness of the sleeve moved down the arm. The necklines emphasized a feminine sloping shoulder, and gowns around the neck and bust were increasingly fitted, while lower arms were plumped out and supported by sleeve plumpers. Points tailored toward the waist emphasized the sloping shoulders and smaller waist. Necklines were lower for eveningwear than daywear.

Hair was parted in the middle and coifed in ringlets on the sides and sometimes the top of the head. Rakish hates of earlier in the decade gave way to primmer, more feminine bonnets. Slippers completed evening ensembles. Button boots with elasticized insets appeared for daywear.

As fashion goes, these clothes were less prohibiting than some of the silhouettes that would come later, but women were losing ground on the way to some of the most constricting fashion choices that would not be modified until after the first world war.

Cath Schaff-Stump writes speculative fiction for children and adults, everything from humor to horror. Her YA Gothic fantasy The Vessel of Ra is available from Curiosity Quills. Catherine lives and works in Iowa with her husband. During the day, she teaches English to non-native speakers at a local community college. Other recent fiction has been published by Paper Golem Press, Daydreams Dandelion Press, and in The Mammoth Book of Dieselpunk. Catherine is a co-host on the writing and geek-life fan podcast Unreliable Narrators. You can find her online at Facebook, Goodreads, Amazon, @cathschaffstump, cathschaffstump.com, and unreliablenarrators.net